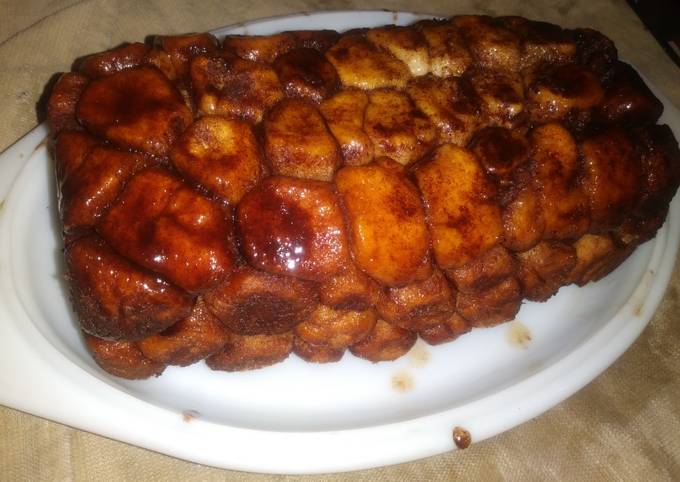 Toss Pillsbury™ biscuits with cinnamon-sugar, pour in a brown sugar-butter mixture and bake in a bundt pan until golden brown. Monkey Bread is a pull-apart bread that's insanely addictive! It's made with soft biscuit dough that's coated in cinnamon and sugar, loaded with pecans, and drenched in a sticky, sugary, butter sauce. You can have Anita's Monkey Bread using 6 ingredients and 10 steps. Here is how you achieve it.

Open up all three cans of biscuits and cut each biscuit into quarters. Milk is used in the dough, I used whole organic milk. Sugar lots and lots of sugar!!. Salt is used in the dough but a little bit of flakey salt would be good as a finishing touch too!.

All Purpose Flour can be hard to come by lately but you can't. Remove the biscuits from the packages, and cut into quarters. Drop a few biscuit pieces at a time into the sugar mixture, and coat thoroughly. Monkey bread (also known by other names including pull-apart bread and bubble bread) is a soft, sweet, sticky pastry served in the United States for breakfast or as a treat. It consists of pieces of soft baked dough sprinkled with cinnamon.